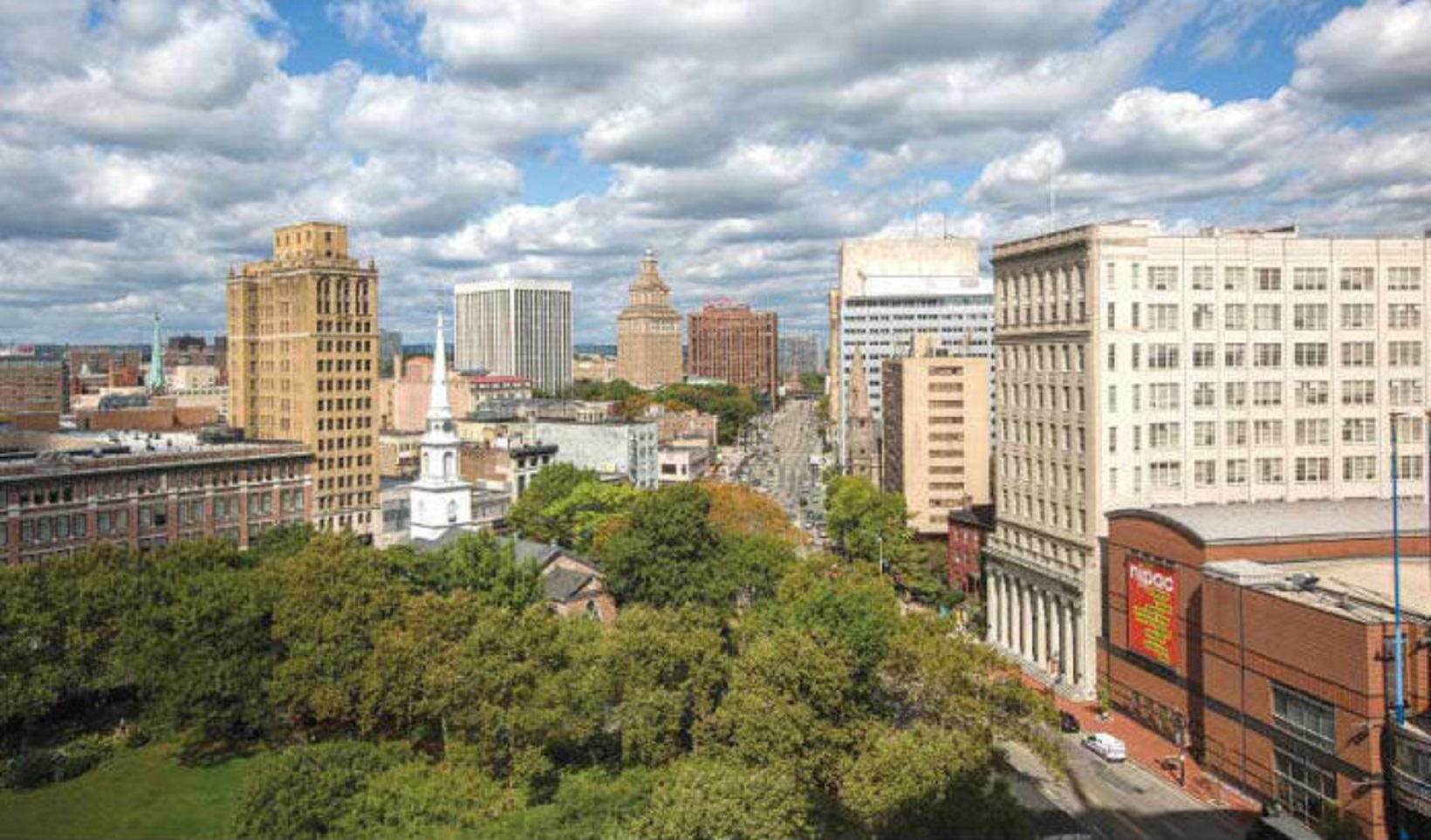 He said he’s working on a project that includes container houses — a first for the state. And a project that has 20 units. He knows many Newark residents desperately need access to affordable housing for the city to grow.

He also knows this: Newark needs a lot of market-rate high-rises, too.

“We need more,” he said, “because they’re bringing the attention to the city. That’s pretty much the market for the city. Once you get the market and the attention, we’ve got to take that and refocus that energy back into the neighborhoods. It’s a holistic approach. We have to work together to get the city whole.”

Wasseem Boraie, a vice president of Boraie Development, is one of the developers building those market-rate high-rises. He recently completed Rector Park, a 50-story, 170-unit building near the New Jersey Performing Arts Center. He has another project, near Newark Penn Station, that will be even bigger.

“When I see what gentlemen like Siree are doing in the neighborhoods, that makes the downtown better,” he said. “And then, when guys like me do what I do downtown, that makes Siree better.

“It’s ecosystem, and it’s got to be balanced.”

Boraie said some cities are missing that. They have lots of development in some areas, none in others. For Newark’s residential market to move forward, all areas and project types need to be going forward, he said.

Boarie and Morris were two of the residential panelists on a recent webinar, “The Way Forward for Newark Real Estate Development,” the annual event by the Newark Regional Business Partnership that looks at the future of real estate.

Here are their best thoughts (edited for space and clarity):

Q: Discuss some of the positives for residential development in Newark.

I think Newark is really fortunate to have, really, that critical mass across many sectors. And I think we have the ability from within the community to really help each other as we come out of this pandemic.

Wasseem Boraie: I can only look at it how it was when we first started investing in Newark, back in 2006, to where we are 15 years later. I think the public safety aspect of what’s happened under this current administration has made it much easier for guys like us to do what we do.

For example, on Rector Street, when we started that project, people said, “Who’s going to live there?” …

For us, letting people feel comfortable, having a guy let his girlfriend go downstairs at 10 o’clock and walk the dog? That is a huge, huge thing — and now you’re finding it throughout the city.

Q: Discuss some of the challenges for Newark, post-pandemic.

Gabriel Lopez: One of the longstanding concerns of the community has always been in public infrastructure and making sure that organizations and other public infrastructure systems are updated and improved. Newark Penn Station typically provides the first impression for many visitors. Unfortunately, it hasn’t been a favorable one for years. It’s been kind of black eye for the city.

The station has been in need of a major makeover (which it is now scheduled to get). I think, especially now, with COVID magnifying the importance of sanitation, and concerns about health, wellness, these improvements are critical for our projects to remain competitive and viable, so that people can get to the city and get to get to work and come to Newark.

Siree Morris: As we reach the critical mass and start activating the streets and corridors and we’ve got all these residential units, we’ve got to start thinking about, ‘What are the people going to do as they’re here?’ What other retail, commercial, entertainment and things like can bring kids to the city, because, as we build it and as we grow, we can have a bunch of people, but people won’t stay if there aren’t reasons for them to stay.

Q: Discuss how the city’s landscape is impacting development.

SC: Walker House is a mixed-use building that we converted from an old office building. Because of that, it had no onsite parking, which presented a challenge, but also an opportunity. The parking and infrastructural resources that Newark already has is so robust that the idea that new development would need to build new parking (is outdated). I think we should look to optimize the resources that are in our community already.

And then, the overall security of downtown provides an opportunity that parking doesn’t have to be under your apartment — it activates our streets, it gets people to go to our retail locations and people feel comfortable parking a couple blocks away from their home. I think that’s a really good outcome. Hopefully, we can see the optimization of all the parking resources we have downtown go up before we start building more spaces.

GL: The (proposed land bridge connecting Mulberry Commons and the Ironbound) and some other places are all breathing new life into the downtown and the Ironbound. Newark is evolving into a denser, safer, more active city. I think our mental map of this area has been historically defined by Route 21 and the Gateway tunnels — that’s how you’ve navigated the area around Penn Station and the Prudential Center, and it hasn’t been ideal.

Mulberry Commons and the bridge have the potential to change that narrative and make a new kind of Central Park.

Q: Mayor Ras Baraka talks about Newark Forward: What does that mean to you?

WB: I think it’s two things: It’s real, true economic equality. Not the token sense, but a wide variety of projects, developers, male, female, that are building the city, because I think it reflects the culture of the city. There are some cities where that doesn’t reflect its culture.

SC: I think it really means growing the pie. And there’s a lot of different pies. I’m talking about buildings that are not just for new residents in Newark, but the existing residents — in terms of developers bringing in new developers, so that you can take on larger and larger projects.

I think a big thing is to try to find opportunities for homeownership. Because, while rental development is great, long-term value creation for Newark residents starts with owning assets and growing assets. I think we have an opportunity to build a future of Newark that benefits all.

SM: Newark Forward is simple: It’s us taking a holistic approach in our communities. We’re trying to bridge the gap from an equity standpoint. It’s one thing to have successful people at the top, but we have a bunch of people that come behind them. If we all keep an approach of trying to grow Newark together, and share and be equitable and be creative and innovative, I think the future of Newark is tremendously bright.